Greetings Readers….. More tales from the Wandle Riverbank via the plush surroundings of Hackbridge Towers. In what may turn out to be the highlight of my footballing season Tory MP with either the worst ever  hair cut or worst ever syrup in the history of British Politics Michael Fabricant has outed himself as a Dulwich Hamlet supporter, which has proved to me two things, one, that there is a God and two that the Almighty doesn't like Dulwich that much either..... 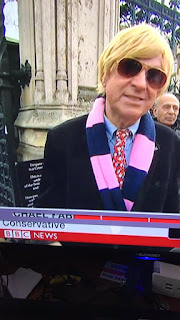 The meet the manager night up at the Ramble Inn went well with what I thought would just be an hour or so ending up being a good few hours in the company of fellow Terrors and of course Ash, who I promise you is a great bloke who really cares about everything connected with Tooting and Mitcham. Also, good to spend a bit of time with both Nick from Predator Pest Solutions and of course Jimmy from the Ramble, two people who have done a lot behind the scenes with sponsorship and support over the last couple of seasons. There are a lot of positive things going on both on and off the pitch. Please get involved in any way shape or form if you can spare a bit of time.

Look out for blogs from both Warren and Adam “Besty” who have started up the blog “South London Is Black and White”. Both relative new comers to Fortress Imperial but both very committed to the Terrors with a new way of looking at all things Black and White. Expect well thought out pieces of work rather than the childish and depressing stuff that I knock out when I can or the total lunacy of Sir Tim Magone’s work, who by the way still has not bought a fridge magnet from my upmarket super stall. Tight Bastard….

Please pay them a visit and contact them if you want to contribute any Terrors related articles.
Please click on the link below

Well worth supporting and checking out, good to see the social media outlets growing with more TMUFC related sites and blogs. Both Adam and Warren are top blokes... buy them tea and beer and make them famous.

A big thanks to everyone who has bought stuff from the stall over the last few weeks it has allowed us in the supporter’s club to help out with player sponsorship and to help a bit with the race night which is taking place on Friday 12th April… Every little helps and so if it’s only buying a pen it all adds up and helps around the club.

There is also going to be a fans forum at the ground this Wednesday 10th starting at 7pm so a chance to hear from various groups and people what is planned for the future. Please come along if you get the chance.

Well now to events on the pitch. I ended up missing the Uxbridge away game which of course meant I missed the 1-0 victory. Not missed too many away games this year but I do enjoy our travels. Plus the fact, our away form has been good this year and in truth if our home form had in parts matched it, the play offs could have been easily in our grasp. But as I said at the start of season I’d be happy for a middle table finish and at the time of writing it looks as if we will finish just outside the play off places.
Monday Night 1st April was the chance to see the Under 23s who needed to beat Ramsgate to be crowned champions. A few die hards turned out for what would be a frustrating night for The Terrors as they missed a few sitters at the end as the game ended 0-0. Toots just need one more point to win the league, shame it didn't happen at Fortress Imperial. The under 23s have been really impressive this season and things are looking very positive for the future. Plenty of scouts from various league clubs turning up to see our crop of youngsters which just proves how right things are turning out at Tooting. Just to renforce things, one of my favorite players Isiah Jones has signed for Middlesboro and I wish him all the best.
Tuesday meant that loads of Terrors made the short journey down to Banstead for the Surrey Senior Cup semi final and the last real chance of claiming any silverware this season. After a few days of sun the weather looked pretty bleak for the trip though the urban hell hole of Sutton, home of the new Greggs superstore and restaurant. On what was to be a freezing night in March the Terrors over came Banstead Athletic in a rather dull game in which both teams were worried about losing. A second half penalty was enough to send us through to the Final which will take place at Dorking's new ground on Tuesday May 7th.
Should be loads of Terrors there so if you only get to one more game this season, make it this one. The only bad point for me was when I was verbaly assaulted  by The Shoe Box Sex God Bornatotter who shouted "Scum" at me as I quietly sat in the bar talking to chums. Bullying is wrong weather phyiscal or mental. It really shows what a great big fat poo pants the banjo playing lefty knob jockey really is.

Well Saturday meant a visit from the "Moists" from Molesey whos ground has matched Leatherheads in biblical tales of flooding and damp patches this season which takes some doing. 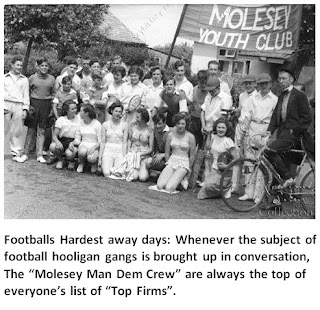 Toots running out 2-0 winners with two great goals from Tope Fadahunsi and yet another from Danny Bassett.
Should have and could have scored more but still a good game with other results still keeping us in with a chance of the play offs.
Spend the game with Lee from the St Matthews Project which was a good chance for two elderly gentleman to have a good moan and put the world to rights.
Another link below to click on to see what brilliant work they are doing in helping youngsters get involved in football and away from other distractions.


Please click on the link below for Bog End Ant's take on the Molesey game.

Please add and subscribe to his channel which is getting better and better. Can't be long before BT Sports come knocking on the door to offer him a job as a pundit.

Well my Ancestry DNA results came back which along with the standard and expected split between Ireland, Scotland, England and Wales threw in the fact I am 1% Swedish, which has helped explain a few things. I had always fancied the blonde one out of Abba when I was younger….. That big fat bum and hips really did it for me all those years ago and of course his sexy little beard. 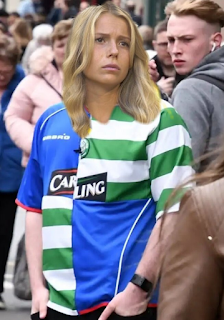 Posted by Hackbridge Harry at 12:20 PM