I do wonder if there is something badly wrong with me. The Pre Season friendly fixtures have just been announced and I'm already looking forward to next season and standing behind the goal hoping and praying that this again could be "The Season" and if we can ever come close to the fantastic 2016-17 season in which Frank Wilson's Terrors hit the heights of the Rymans South defeating all that came before them. Or will be like the end of the 2011-12 season when Concord Rangers and Wealdstone put 6 past us in our last few home fixtures and on the last home game we lost to Bury Town 7-1 in our that infamous relegation year. I remember walking away from the ground wondering if I could be accused of child cruelty by allowing Bogend Ant to go though this, but he's made of strong stuff and despite many tears still turns up now with his dreams still alive. In the relatively short period in footballing terms since I first turned up to see Toots I've seen them relegated twice, win two cup finals, lose one final and become champions... So despite all the doom and gloom one thing you can say about following Tooting and Mitcham is that it is very rarely boring. 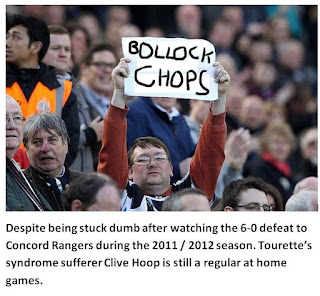 In truth football is often misery and sorrow. Every now and again a victory over a local rival or a cup run can lift your sprits. But that's not the reason most of us turn up week in and out. The sense of belonging and meeting up with friends is why we come to games.... Or to get pissed and avoid going to the Asda on a Saturday afternoon.
Many of us have our "Lucky" routines or "Lucky" clothing. The reason TMUFC got relegated last season was not due to being really crap, being really unlucky or the will of the footballing Gods but solely due to my choice of underwear for the final game against Met Police.
Visit any Non League ground and you will see people who's choice of lucky socks and pants seems to be a season long decision. On the way to Harrow Borough last year we past a gentleman waking down the road who looked like one of the reconstruction models from an episode of "Finding Bigfoot" although a mile or so away from the ground we all knew where he was heading.... Of to see Harrow Borough in his "Lucky" socks and pants. Which I had no doubt he had been wearing since the 1986-87 season.

Way back in October 2014 Toots played  Merstham in the League Cup at the KNK. Not exactly the most glamorous of fixtures but one that sticks in my mind due to a chat I had with a bloke outside the ground about Tooting and Mitcham. He told me he used to be a regular at Sandy Lane and had followed the club for many years before moving out into the sticks. The game was his first visit to the KNK and he had not seen a Tooting for around 25 years and he was really looking forward to the match and seeing the new stadium for the first time. He looked and sounded really happy to be there talking to fellow Terrors and looking forward to kick off.Tooting lost 0-5 and were shite... I mean really shite even by their standards. I often wonder if he ever came back or ever regreted his choice of socks or underpants for that evenings "entertainment".

Also another moment was when Tooting Sex Icon Dave Irons spotted someone going into the ground at one fixture and said "Every time that bloke turns up we loose" I mentioned that he
could say that about every single one of us but he was not convinced. Dave has spent many years following both Tooting and Mitcham and Tottenham so over time has become an expert on broken dreams, misery, heartache, lucky pants and weird superstitions about random blokes turning up to games causing yet another defeat. Tottenham last won the league in May 1961 when I was only three months old and wearing a nappy.. I'm now heading into my twilight years and it can only be a matter of time before I'm back wearing nappies. Will Tottenham ever win the league when I'm still in control of all my bodily functions. Only time will tell.
Well I'll be heading over to Marks and Spencer's in Sutton shortly to get my lucky lingerie for the forth coming season. Maybe head over to Ann Summers to get myself a new studded leather thong... Nothing to do with football I just fancy getting a new one. 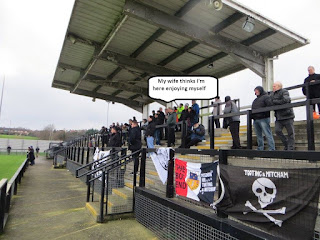 Posted by Hackbridge Harry at 3:51 AM No comments: