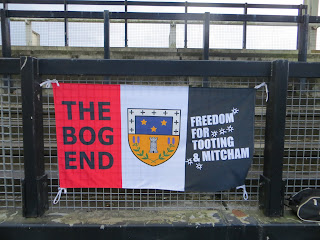 Now it's there turn to visit Fortress Imperial for our fourth game of the Victor Meldrew South Central campaign. It's also The TMUFC family fun day. So no stress, worry or blind panic as I set off to see if the Terrors could make it four wins in a row. Northwood almost putting a damper on the game by going ahead in the first half after having a goal disallowed earlier on. Toots seemed a bit out of sorts in the 1st half but came out in a far better mood for the second 45mins. An equaliser from Danny B set up a nervous finale as Toots pushed forward as Northwood looked to score from counter attacks. Well into injury time the fantastically talented Razzaq Coleman scored, sending Fortress Imperial into some pretty mental scenes as only last minute goals can do.
It was also the TMUFC family day and a good crowd of just under 300 turned out for the afternoon. Great to see Tooting MP Dr Rosena Allin-Khan at the game and hope to see her back again soon.
A big thanks to everyone who helped make the day a sucess. One of the really positive things this season is the amount of volunteers who help out on match days doing various jobs. This really does help improve the whole match day experience and means more things can be arranged and run behind the scenes

Sunday and another trip to the Fortress to see Tooting Bec play Walton and Hersham play out a very entertaining game in the FA Vase. W&H winning 4-2. Tooting Bec our new tenants playing some good football but undone by a couple of great goals by the visitors.

A reasonable crowd including supporters from Sutton United, TMUFC and a few ground hoppers
As I've said before Non League football is far far better than people seem to imagine. Two days, two games and still change out of a twenty pound note for admission and programmes for myself and Ant. Add a couple of quid for food and drinks still far less spent on watching mercenary premiership players going through the motions for a weekly wage that would cover the playing budgets of two or three Non League clubs for a year.

Another trip to Gangrene Lane for another Friday night FA Cup match for Sutton Common Rovers this time against Beaconsfield was next on my hectic lifestyle, an enjoyable game but it was not to be SCR night as they lost 3-1. I was hoping they would get through for the chance to play them at Suttons ground. It's about time we played there again. 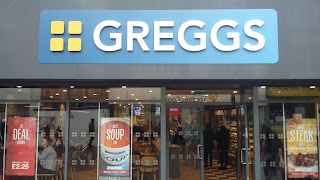 The Greggs Superstore on Sutton High Road.... The only reason to go to Sutton
this season ?

Anyway sod them. The big game this weekend was the visit of AFC Varndeanians to Fortress Imperial for the FA Cup fixture. A couple of years ago the Footballing Gods seemed to have it in for the Mighty Toots, well the Terrors got a huge hand from them as just before we scored our first goal the Ref and Linesman missed a nailed on hand ball in the penalty area which the South Coast side were quite understandably pissed about. TMUFC pretty much scoring at the other end a couple of seconds later. Good job VAR was not in operation but it's about time we had some luck. Goals from Nathan Daly, David Castanho and Nebay Haile sealed the 3-1 win which takes us into the next round. A crowd of 260 at the game including a number of Varndeanians who brought more than most of the other teams in the Victor Meldrew South Central will do. 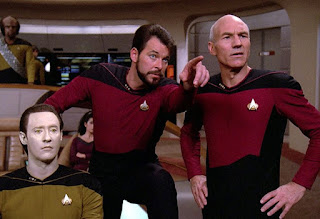 Varndeanians on the starboard side Captain

Spent the second half with Lee from St. Matthews Project and what a top chap he is. St. Matthews links with Tooting and Mitcham are getting stronger and that can only be a good thing. Although we spent the whole of the 45mins moaning just like charectors from a bad episode of "Last Of The Summer Wine"
Please play them a visit and find out more about this fantastic group :
http://www.thesmp.net/

We have drawn Dorking Wanderers at home in the next round. A town famous for it's massive cock statue and little else. Saying that they are a team that have had a huge amount of sucess since we just beat them to the title in Franks second year so maybe I'm just jealous of sucess on the pitch and large cocks in general. Winable but it will be tough. Probably at good job it's at home. I'm sure they will bring a few over to add to the crowd, hope so anyway. 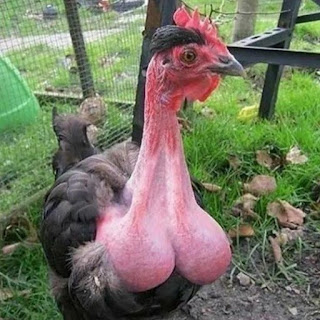 Missed two events during the week. A league cup fixture at South Park and a 2-1 victory in the group stages. Why the league has thought this to be a good idea is totaly beyond me but "Hey Ho" a win is a win. Also missed the meet the manager get together at the ground die to work which was a shame and something I was hoping to attend. I work in a government office in Westminster as as you may have noticed there has been a lot going on there over the last few days, keeping your truely stuck at work sorting out various problems caused by the loons running the country. 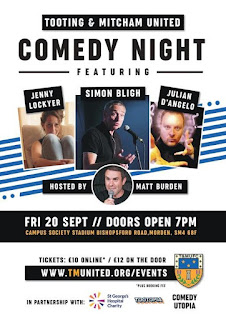 Missed the 1-1 draw away to Harlow which means we have gone 8 games unbeaten so far this season. Fantastic stuff from the Terrors which has lead to much happiness and laughter in Hackbridge Towers over the last couple of months.
Talking of laughter the club will be holding a comedy night this coming Friday 20th Sept. So head over to Fortress Imperial for a night of chuckles and smiles which is not rhyming slang for piles. I'll be signing autographs and showing off my Twerking skills so be there early.