Well after what seems to have taken longer than Brexit to sort out Tooting and Mitcham managed to get the away fixture against Molesey played and they took the 3 points back to Fortress Imperial after going 3-0 up by half time and then letting two goals in during the second half just to bring the travelling Terrors back to earth with a jolt. I was not able to make the game so sat at home with Bog End Ant following the game online which proved to be a rather stressful 90 or so minutes, we both agreed to turn our phones of when Molesey got their second. Wedgie got sent off as well which makes it at least 43 red cards this season. It's not easy being a Terror on match days. TMUFC are one of those teams that even if they were 5-0 up in the 87th minute you still say to the bloke next to you "This could still go either way". I believe that we are now safe from relegation this season which means I now longer awake drenched in sweat and urine after another nightmare which sees us end up in a league playing various clubs named after Northern Line stations. 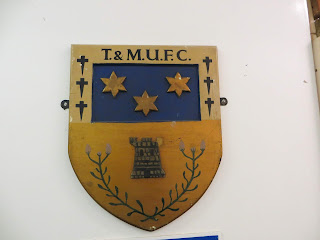 Daryl Coleman now starts a 100 game ban after his "incident" at Bracknell which is a shame. Good to see him sign off on his break with a goal... Talking of which, the Terrors got a fair bit of exposure on Twitter after the Bracknell game, They say all publicity is good publicity so with that in mind Antonio Simeone OG  and the subsequent Twitter trolling I got when the clip of the goal made the rounds of various Non League sites was a good thing....ish
Antonio has been a rock since coming back this season.... And with that in mind I took the Twitter abuse on the chin and have spent the last few days praying to every god, idol and religious figure I could think of for Dulwich to balls up and someone to have it on film... I will get my revenge. There is still a chance they will get relegated. They lost to Oxford City so my animal sacrifices on Mitcham Common seem to be working, so fingers crossed. Now the squatters are firmly back in their Sainsbury's car park the love in is slowly reverting back to normal service and the hatred and banter is returning now that Mishi is thankfully getting back to full fitness. Not that Bog End Ant ever stopped. 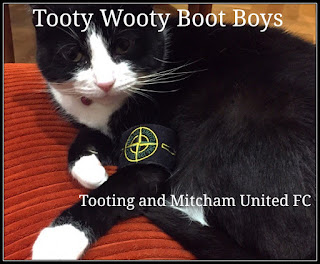 Well it was Cheshunt's turn to play at the Fortress. I turned up at the ground to watch the Sutton United game in the bar and a chance to see the Shoe Box Love God Bornatotter and his sidekick "Dirty Barry" on the large screen. A very homoerotic sight they were as well. Looking like a "Right Said Fred" tribute band in the Northern wastelands of Chesterfield... I can only dream that one day it will be me on the big screen with the BT Sport cameras lingering on my handsome good looks as I'm beamed into millions of households all over the country. My day will come.
With a place in the play offs still mathematically possible we needed to get a good result against the high flying Chunts. Which of course means we lost. On the plus side no one got sent off and in fairness played well for long periods of time but the Footballing Gods had other ideas. Toots now need either snookers, or at least the five clubs above us to loose every game until the end of the season or a major biblical apocalypse for us to get into the play offs. Ways and Feading seemed to have sown the championship up and will hopefully celebrate by finishing building the toilets at their ground. Egham look doomed which is a shame and it looks as if our Footballing jinxes Staines way well be dropping into the division after getting totally stuffed in most of their games this season.
Still a few rumours that there may be further restructuring next season and that Staines going down may impact on what league we will play in.... Watch this space.
Up The Stripes !!!! 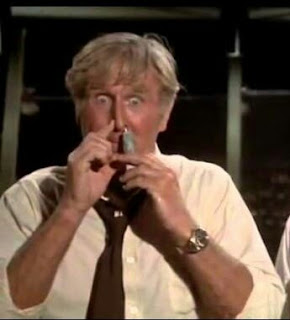 Posted by Hackbridge Harry at 12:59 PM