As we now head to the end of the season it's time for yet another view of the black and white world from my throne in Hackbridge Towers. You will all be pleased to know that Tim Magone finally purchased a bloody fridge magnet so my constant abuse, online trolling and verbal assaults have worked. If you don't want to suffer the pain and humiliation Tim went through... Buy a fridge magnet or pen from my high end shopping emporium. You've been warned.

"If you want my body and you think I'm sexy"


Right then, I now find myself with rather a large problem. Those chaps at the blog site southlondonisblackandwhite  are putting out really good stuff full of insightful football wisdom and well written content about Tooting and Mitcham far removed from the rabbling shite that I come out with, I will now have to up my game. Warren and Besty have been great additions to the Bog End Ranks and are looking for further contributors  When I say "Up my game" it means I probably won't so Dear Reader expect more of the same rubbish from me moving forward. I'm too old to change.
Please check out their blog by clicking on the link below.

And while I'm on the subject of young sods stealing my online thunder please check out the fruit of my loins Bog End Ants You Tube channel for his view of the black and white world, always worth checking out. Please subscribe to keep up with the latest Vlogs and please remember that the more successful the channel is, the more chance is that he will be able to buy me and Mrs H a six bedroomed home somewhere glamorous like Canvey Island 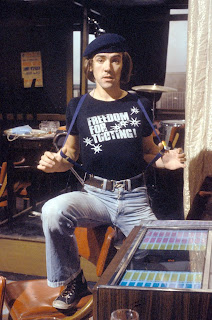 The "Race" night over at Fortress Imperial which was well attended and hopefully will be the start of many events held by the members club. Over £1600 was raised and the night was a great success. I continued my normal luck with picking winners by losing in every race while those around my counted their winnings with big grins and laughter. Events like this can help a lot with getting more funds to help the playing budget so please come along to any future events. I'm still waiting for the go ahead for my "Bog End Mud Wrestling and Mixed Martial Arts Custard Pie Fight" evening to get the ok.
Saturday the 13th April saw another away day victory and another 3 points in the bag when the Terrors headed West to Ashford Town which will live long in the memory not for the game but for one of the most surreal pitch invasions I've ever seen and watching Tooting and Mitcham you do tend to see a few. After the first goal one of the travelling Terrors jumped on the pitch and did a little disco dance very similar the ones on show on Westminster Bridge by the climate protesters to impress the Ashford goalie and make him feel better about letting the goal in. This was either the first act of Extiction Rebellion the climate protest group or a result of too much alcohol by one of our regular pitch encroachers. This of course gave the travelling Bog End to relive the golden days of 1970s disco by spending the rest of the game strutting their funky stuff in a boogie wonderland (Ashford). It's never dull watching Tooting and you never really know what will happen when you walk through the turnstiles at a Toots game. We certainly have some characters at TMUFC.
The following Monday night was the under 23s game against Sittingbourne and the chance for them to finally get there hands on the championship trophy at long last. In what turned out to be a rather comfortable 6-1 victory the team claimed the top spot. I've watched the Under 23s a few times this season and been really impressed. The set up at TMUFC is really working well and the style of football played by all the teams is worth checking out. If you get the chance in the future try and get to some of the youth games and support them. 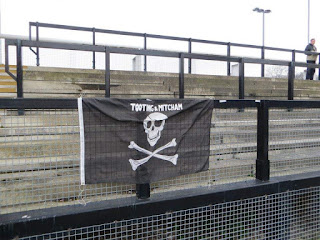 Easter Saturday was the TMUFC family day game against Chalfont St Peter. A crowd of 378 turned up on the free admission day for what would be a pretty good match on a very hot day. Chalfont's goalie making some good saves in a 1-1 draw which was a fair result in the end. The result however did put an end to any play off chances we may of had. A couple of good things apart from the new faces at the game was that I was able to entertain the crowd with my singing using a mobile PA unit supplied by Phil Nightingale who says I can use it at further home games which I'm sure everyone will look forward to. Saturday also marked the return of "Terror The Tiger" the club mascot and the chance for Phil to work of a few pounds in the hot sun while wearing the big furry suit. I'm told that there are various adult fetish groups and sites for people to dress up in animal gear and act in ways that would outrage the likes of Cliff Richard or Jacob Rees Moog so there may be yet another way for the club to make more money, I'm sure Phil won't mind. 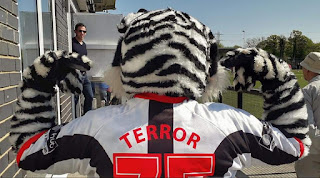 Easter Monday saw the short away trip to South Park for what was our last away game of the 2018-19 season exactly two years to the days that we were crowned champions at Dorking (What ever happened to them ?). Another large group of travelling terrors headed down the A217 to watch a good defensive performance from "The Park" who had gone one nil up in the sixth minute. Toots got one back in the second half when Hady finally breached the solid South Park defensive wall. For the rest of the game yet another good goalkeeper kept us at bay in what was in truth a below average game for TMUFC. South Park are still in a relegation battle but the point they took from this 1-1 draw may well keep them up. A bit of controversy right at the end when Toots had a goal disallowed for offside but maybe if we're honest SP deserved something out of the game.

So FC Romania are our last opponents for this season when we play them next Saturday at Fortress Imperial.
See You There... 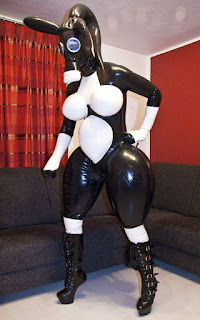 Now Available In the Club Shop